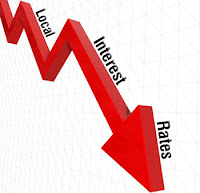 The nominal yields on "high-grade" government debt instruments continue to plunge; see here. Real interest rates on U.S. government debt are negative (I talk about real yields here).  It is a pretty bearish sign when the only thing investors appear to trust is the ability of (some) governments to service their debts.

The "flight to safety" phenomenon is a natural response by investors when uncertainty (along several dimensions) increases. Much of this uncertainty appears to be political in nature; even Mark Thoma appears to agree (of course, Mark blames the Republicans for this; as if only one side of a boxing match can be held responsible for inflicting harmful blows and counter punches.)

Although political uncertainty is almost surely playing a role in current events, one should not discount the role that political certainty can play. Greek youth, for example, appear certain that the governance of their country will remain hopelessly inept for the foreseeable future; and so many are flocking to other parts of Europe, including Germany. (Are the young reneging on their "obligation" to finance entitlements for the old?)

Not all that ails us has its roots in politics though. Personally, I think that the recent recession was associated with a significant "structural" shock that will take a long time to work out (see here). The U.S. unemployment remains elevated at 8.1%. People are eager to work (at well-paying jobs). At a Hyundai plant in Montgomery, Alabama, more than 20,000 have applied for one of the 877 job openings; see here. At the same time, employers appear to be having a hard time finding qualified workers in several occupations, including truck drivers, software developers, laborers, nurses, machinists, accountants, scientific researchers, administrative assistants, leisure and hospitality workers, and repair technicians; see here.
Posted by David Andolfatto at 12:08 PM