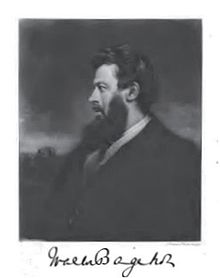 What principles should govern the way a lender-of-last-resort (LLR) operates during a financial crisis? On this question, one is frequently referred to two key principles, attributed to Walter Bagehot in his book Lombard Street. The two principles are usually summarized as "lend freely and at a penalty rate." What does this mean?

In "normal times," firms regularly borrow cash on a short-term basis (say, to meet payroll). These loans are usually collateralized with a host of assets (e.g., accounts receivable, property, securities). The dictum "lend freely" in this context means to extend cash loans freely against the collateral that is normally put up to secure short-term lending arrangements.

The rationale commonly offered for the LLR is that during a crisis, "perfectly good" collateral assets are either no longer accepted as security for short term loans, or that if they are, they are heavily discounted (e.g., a creditor will only lend 75 cents for every dollar in collateral, instead of the usual 99 cents). Whatever the ultimate cause, this type of "liquidity crisis" creates havoc in the payments system. This havoc can be avoided, or at least mitigated, by a LLR that stands ready to replace the "missing" lending activity. (Or so the story goes.)

Let's say that the normal discount rate on high grade collateral is 0 < d < 1. So if a creditor offers to lend $99 for every $100 in collateral, d = 0.01 (one percent discount). Let's suppose that during a crisis, the discount rate rises to c > d. (If c = 0.5, then there is a 50% discount or "haircut" on collateral.) One issue that the LLR must address is the discount rate it should offer on an emergency loan. Let me call this discount rate p.

Now, if the LLR sets p = c, then what is the point of having an LLR? So clearly, if the LLR is to influence lending activity in any manner, it must  set p < c. Opponents of LLR activity like to label p < c a "bailout." (This term is rarely defined precisely; it appears to be a label to attach to programs that one does not like.)

At the other extreme, the LLR could set p = d. In this case, the LLR is discounting collateral in the same way that the market does during "normal" times. If the LLR instead set p > d, it is charging a "penalty rate." (Note: I do not think that Bagehot ever used this term.) How should the LLR set this penalty rate and why? Here is Bagehot:


First. That these loans should only be made at a very high rate of interest. This will operate as a heavy fine on unreasonable timidity, and will prevent the greatest number of applications by persons who did not require it. The rate should be raised early in the panic, so that the fine may be paid early; that no one may borrow out of idle precaution without paying well for it; that the Banking reserve may be protected as far as possible. (emphasis, my own)

Well, O.K., so he does not appear to answer the question of what discount rate to apply; only that it should be "very high." But I am less interested here in the precise penalty rate as to the rationale for why a penalty rate is necessary. A colleague of mine (who appears to have done a great deal of reading in the area) suggests that the rationale was primarily to ensure that the Bank of England did not run out of reserves (an event that would have led to its failure, and the subsequent end of civilization in the minds of many at the time).

Of course, the Federal Reserve Bank of the United States does not face the prospect of running out of cash reserves, the way that the Bank of England did back then. This is because "cash" back then took the form of specie (gold and silver coin). "Cash" today takes the form of small denomination paper notes (and electronic digits in reserve accounts) that the Fed can issue "out of thin air." In light of our modern institutional structure, I wonder whether Bagehot, living in today's world, might not have dropped his "penalty rate" dictum?

Is there any good reason left for the penalty rate? Perhaps there is. But it is clearly of second-order importance during a financial crisis. First, lend freely. It is probably not the time to worry about this penalty rate or that penalty rate in the depths of a liquidity crisis. If an institution is deemed, after the fact, to have benefited "unfairly" at the expense of society during an emergency lending episode, then a "fee for service" (i.e., tax) could be applied after the crisis has passed.

P.S. Would be interested to hear from historians on this subject.

Postcript: January 30, 2012
I would like to thank Josh Hendrickson for sending me the link to this paper:

Turning Bagehot on his Head.
Abstract: Ever since Bagehot’s (1873) pioneering work, it is a widely accepted wisdom that in order to alleviate (ex ante) bank moral hazard, a lender of last resort should lend at penalty rates only. In a model in which banks are subject to shocks but can exert effort to affect the likelihood of these shocks, we show that the validity of this argument crucially relies on banks always remaining solvent. The reason is that when banks become insolvent, Bagehot’s prescription dictates to let them fail. Penalty rates charged when banks are illiquid (but solvent) then reduce banks’ incentives to avoid insolvency ex ante and thus increase bank moral hazard. We derive a condition which shows precisely when this effect on ex ante incentives outweighs the traditional one and show that it is fulfilled under plausible scenarios.

Posted by David Andolfatto at 10:19 AM