The nominal interest rate is a relative price. It is the price of a dollar today measured in units of (the promise of) future dollars. For example, if the risk-free annual interest rate on a U.S. treasury is currently 5%, then one dollar today is valued at 1.05 future (one year from now) dollars.

In macroeconomic theory, the nominal interest rate plays second-fiddle to the so-called real interest rate. The real rate of interest is also a relative price. It is the price of output today measured in units of future output (think of "output" as consisting of an expenditure-weighted basket of commonly purchased consumer goods and services.) So, if the risk-free annual interest rate on an inflation-indexed U.S. treasury is 2%, then one unit of output today is valued at 1.02 units of output in the future. 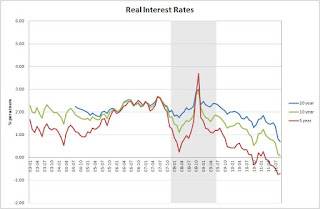 The decline in real rates that has taken place, especially since the beginning of 2011, is a troubling sign. A negative 5-year rate implies that current output is now less valuable than future (5 year) output. In other words, (claims to) future output are now trading at a premium. This premium may be signalling an expected scarcity of future output. If so, then this is a bearish signal.

The decline in market real interest rates is consistent with a collapse (and anemic recovery) of investment spending (broadly defined to include investments in job recruiting). For whatever reason, the future does not look as bright as it normally does at the end of a recession. To some observers, this looks like a "deficient aggregate demand" phenomenon. To others, it is the outcome of a rational pessimism reflecting a flow of new regulatory burdens and a potentially punitive tax regime. Both  hypotheses are consistent with the observed "flight to safety" phenomenon and the consequent decline in real treasury yields.

Unfortunately, the two hypotheses yield very different policy implications. The former calls for increased government purchases to "stimulate demand," while the latter calls for removing whatever barriers are inhibiting private investment expenditure. There seems to be room for compromise though. Surely there are public infrastructure projects that can be expected to yield a real return higher than zero? This is a great time for the U.S. treasury to borrow (assuming that borrowed funds are not squandered, of course).

In the event of an impasse, can the Fed save the day? It is hard to see how. The Fed's influence on real economic activity is usually thought to flow through the influence it has (or is supposed to have) on the real interest rate. One could make the case that real interest rates are presently low in part owing to the Fed's easing policies. But this would be ignoring the fact that the Fed's easing policies were/are largely driven by the collapse in investment spending. (I am suggesting that in a world without the Fed, these real interest rates would be behaving in more or less the same way.)

In any case, real interest rates are already unusually low. How much lower should they go? Is it really the case that our economic ills, even some of them, might be solved in any significant manner by driving these real rates any lower? My own view is probably not. If there is something the Fed can do, it is likely to operate through some other mechanism. The problem is not that real interest rates are too high. The problem is that they are not high enough (the robust economic prospects that push real rates higher appear to be absent).

We can compute a market-based measure of inflation expectations using a no-arbitrage-condition which states the the real rate of return on nominal and inflation-indexed treasuries should be roughly equal (the Fisher equation). The relevant nominal interest rates are plotted here: 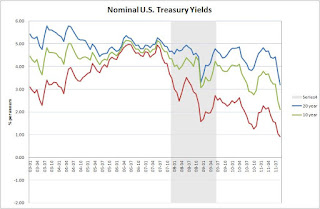 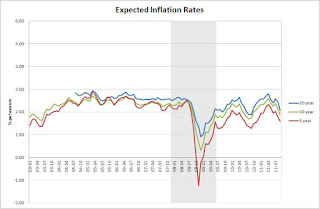 According to this data, the sharp spike up in real interest rates in the depths of the financial crisis stemmed entirely from a precipitous decline in longer-horizon inflation expectations. While inflation expectations appear to have rebounded to their more normal range of 2-3%, they continue to be more volatile than before the recession.

On the other hand, there is no evidence to suggest that inflation expectations are whirling out of control, one way or the other. I'm not sure to what extent this constitutes success. At the very least it is not utter failure.

Am off to Vancouver now for the 25th Annual CMSG!
Posted by David Andolfatto at 9:39 AM