Cyclical asymmetry in the unemployment rate 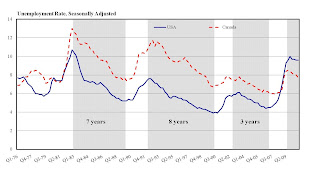 The shaded regions roughly depict the periods over which the unemployment fell from peak to trough. As you can see, what the U.S. is experiencing right now looks a lot like what Canada experienced in the early 1990s. Evidently, it takes time to rebuild the employment stock after a shock. And the bigger the shock, the longer it seems to take.
Posted by David Andolfatto at 9:14 AM