Paul Krugman has teamed up with NY Fed economist Gauti Eggertsson to produce a new working paper: Debt, Deleveraging, and the Liquidity Trap. Krugman provides a bit of background about this project on his blog. I see that at least a couple of people have already commented on paper; e.g., Nick Rowe and Steve Williamson. I thought that I'd join in on the fun. 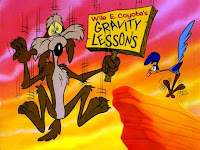 And fun it is. Eggertsson and Krugman (henceforth, EK) certainly have a way with words. The imagery is splendid; my favorite, of course, being the Wile E. Coyote moment (or the Minsky moment) as reflecting the shock that unexpectedly slips the rug out from underneath the financial system.

O.K., so it's fun. But is it progress? I think it is. In particular, it's encouraging to see that the authors (Krugman, in particular, I suppose) are starting to take seriously the notion that agent heterogeneity and financial market frictions may be important elements to include in a theory of the business cycle. It should go without saying these latter two properties are the sine quibus non of modern macroeconomic modeling methodology.  As EK say in their abstract: "Making some agents debt-constrained is a surprisingly powerful assumption...". Yep, it's a real eye-opener alright. (For a few other surprises relating to the power of this assumption, see my entry here).


I want to keep this post reasonably short, so I limit myself to one (albeit important) aspect of the EK paper: the financial market friction, in the form of a debt constraint. Let me explain take a moment to explain the gist of it (for those who may be unfamiliar).

The key friction giving rise to this constraint is limited commitment (or limited enforcement). In lay terms, think about this as the unwillingness  to make good on one's promises. Taking out a loan would be no problem at all -- if debtors could be relied upon to honor their debt, in particular, by servicing it and paying it off out of their future earnings. But if debt default is a relatively low-cost proposition, then debtors may be tempted to exercise the option. To the extent that creditors anticipate these future default incentives, they are likely to restrict credit supply. The result is that people may not be able to get credit even if they are, in principle, able to pay it off.

As an aside, most people probably think of debt constraints as the consequence of "market failure" leading to an inefficiency. But as I explain here (A theory of inalienable property rights), legally imposed debt constraints might be the solution to a social problem when financial markets work too well. I mention this here because the social problem I highlight stems from heterogeneous time-discount factors, which is also a property of the EK model. In the absence of a debt-constraint, the impatient mortgage their future and embark on consumption trajectory that takes them to hell. Unfortunately for the rest of us, it is a hell that they share with the rest of society (a negative externality, in my model); so we prevent them from doing this.

Alright, back to the main story. So they have two types of agents in their model: patient and impatient. In an unfettered financial market, the latter are eventually enslaved to the former. But an exogenously imposed debt constraint prevents this extreme case from happening. Instead, the impatient hit their debt ceiling and then roll their debt over forever, paying interest to the creditors (the patient). If we call the patient agents "China" and the impatient agents "USA," we might start talking about "global imbalances." But let's not go there (though, if you're interested, you might want to go here).

And now for the Minsky moment: an unanticipated drop in the exogenous debt limit. The shock appears to be modeled as permanent. Imagine that a debtor is servicing a constant stock of $100 of debt (he'd like to borrow more, but creditors cannot secure themselves beyond $100). Following the Minsky moment, his debt limit is dropped to $75 (forever). Creditors are now worried that they cannot secure themselves beyond $75. So how does our debtor respond?

It seems to me that he will respond by defaulting on that portion of the debt he is able to; i.e., $25. I mean, why wouldn't he? It is not like he is committed to paying back debt; after all, the debt limit is rationalized in the first place by the limited commitment/enforcement friction.

And so, following a Minsky moment, we would expect a significant redistribution in wealth away from creditors toward debtors. Now that debtors have a lower cost of debt service, we can expect their consumption to increase (they are still debt-constrained, after all).

This is not, however, what happens in the EK model. Why not? Well, because following the Minsky moment, they impose the following behavioral assumption on debtors: "Suppose furthermore that the debtor must move quickly to bring debt within the new, lower, limit, and must therefore deleverage to the new borrowing constraint." [pg. 7]. Of course, this is what I assumed too. The difference is that EK assume that the deleveraging process does not entail default. Somehow, despite an implicit limited commitment friction, debtors are committed to deleveraging by paying down their debt. And, of course, paying down their debt means reducing consumption.

Is it not interesting how one is able to derive such polar opposite predictions from two plausible views of how debt is discharged following an unexpected financial market shock? Naturally, I am biased toward my view--not necessarily because it is descriptively more accurate (though we obviously do see defaults in the data) -- but because it appears logically more consistent with the frictions underlying the debt constraint in the model. If a prescribed behavior is inconsistent with the model environment, then (in my view) even more than the usual amount of caution is warranted in weighing the model's predictions and interpretation of events. (This is not to say that internal consistency is the only desired criterion of a model, of course.)

It would be interesting to explore the robustness of the EK results in the context of a model that takes the source of the debt limit (and its propensity to change) more seriously. (Not that the other shortcuts they take deserve any less attention.)  All in all, I like the paper because it at least makes at some attempt to formalize a popular interpretation of recent economic events. It's a small step forward and should, I think, spur a lively debate and future refinements...which is what our science is all about.
Posted by David Andolfatto at 4:24 PM