There is, evidently, plenty of agricultural work available in the state of California these days. It's hard work--the type of work most of humanity throughout history had little choice but to perform. And by modern standards, the pay is not that great ($10.25/hr); though our distant ancestors might have considered it astronomically high. Indeed, it is high enough even today to attract a large body of foreign workers (largely from Mexico).

What is it that makes a foreign worker willing to go through all the risk and expense of taking such jobs, when an unemployed domestic worker will not?

A labor economist might answer this question by appealing to differences in reservation wages (an individual's reservation wage is defined to be the lowest wage he or she is willing to work for). Evidently, Mexican migrants have low reservation wages relative to their American counterparts. Another way of saying this is that the former group are relatively "desperate." Yet another way of saying this is that American workers can better afford spells of unemployment--they are generally wealthier, and many can draw on UI to make their job search less painful (and presumably, more productive too).

What interests me about the anecdotal evidence reported in this article is what it implies about theories that explain the current high rate of U.S. unemployment as the consequence of a "lack of aggregate demand" leading to a lack of available jobs. I am not sure how well this hypothesis squares up against the sort of evidence reported in this article. On the surface, at least, it appears that jobs are clearly available; Americans just don't want them--they are searching, or waiting, for better opportunities to arise. To me, the rise in unemployment smacks more of mismatch following a structural realignment of sectoral demands, as opposed to an overall decline in aggregate demand (the latter might explain the decline in employment, but not necessarily the increase in job search activity).

When I posted this, I was unaware of Paul Krugman's article this morning: Structure of Excuses. Steve Williamson comments on Krugman here: It's the Housing, Stupid. This is certainly shaping up to be an interesting debate. I would love to see Kocherlakota and Krugman square off against each other in a public debate, but that's not likely to happen any time soon. Too bad.

I have work to do, really I do. But I can't quite lay this to rest just yet. Krugman does not put much currency in the "structural" unemployment view. He says:


After all, what should we be seeing if statements like those of Mr. Kocherlakota or Mr. Clinton were true? The answer is, there should be significant labor shortages somewhere in America — major industries that are trying to expand but are having trouble hiring, major classes of workers who find their skills in great demand, major parts of the country with low unemployment even as the rest of the nation suffers. None of these things exist.

Well, I'm not sure if none of these things exist as he claims. Consider, for example, this WSJ article: Some Firms Struggle to Hire Despite High Unemployment. Here is an excerpt:


In Bloomington, Ill., machine shop Mechanical Devices can't find the workers it needs to handle a sharp jump in business. Job fairs run by airline Emirates attract fewer applicants in the U.S. than in other countries. Truck-stop operator Pilot Flying J says job postings don't elicit many more applicants than they did when the unemployment rate was below 5%.

I read this and I ask myself why Krugman would think you or I an idiot for giving any credence to what Narayana is talking about? Or how about this: 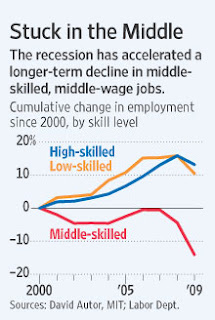 Matching people with available jobs is always difficult after a recession as the economy remakes itself. But Labor Department data suggest the disconnect is particularly acute this time around. Since the economy bottomed out in mid-2009, the number of job openings has risen more than twice as fast as actual hires, a gap that didn't appear until much later in the last recovery. The disparity is most notable in manufacturing, which has had among the biggest increases in openings. But it is also appearing in other areas, such as business services, education and health care. 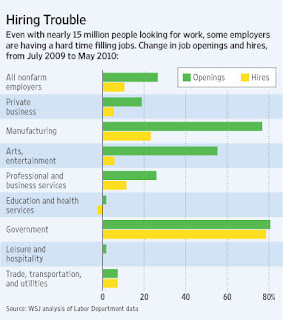 Hmm....that "Stuck in the Middle" figure sure looks like a negative aggregate demand shock alright. Or how about the next figure? How can it be that firms (not the government, you will notice) are having trouble filling their openings? Where does this show up in Krugman's IS-LM model, I wonder? Just asking.

Here is some more stuff: America's Strongest Job Markets. But of course, it should not be possible to rank domestic job markets in this manner...it's aggregate demand, stupid.

What am I missing here? Is there a legitimate debate to be had, or not? Krugman appears to think not. He is acting more like someone who wants to stifle debate, rather than promote it.

Caveat emptor, I guess.
Posted by David Andolfatto at 11:26 AM