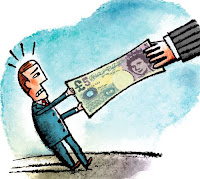 I have to admit that I never ascribed much importance to the idea of "tax policy shocks" as an important driver of the U.S. postwar business cycle. I thought of such shocks as perhaps playing a supporting role, along the lines of Tax Disturbances and Real Economic Activity in the Postwar United States (Tony Braun, 1994).

But I just came across a paper that has led me to re-evaluate my views on this matter: Empirical Evidence on the Aggregate Effects of Anticipated and Unanticipated U.S. Tax Policy Shocks (Karel Mertons and Morten Ravn, 2011). Here is the abstract:


We provide empirical evidence on the dynamics eﬀects of tax liability changes in the United States. We distinguish between surprise and anticipated tax changes using a timing-convention. We document that pre-announced but not yet implemented tax cuts give rise to contractions in output, investment and hours worked while real wages increase. In contrast, there are no signiﬁcant anticipation eﬀects on aggregate consumption. Implemented tax cuts, regardless of their timing, have expansionary and persistent eﬀects on output, consumption, investment, hours worked and real wages. Results are shown to be very robust. We argue that tax shocks are empirically important impulses to the U.S. business cycle and that anticipation eﬀects have been important during several business cycle episodes.

There's a lot of interesting material in this paper, and I encourage anyone interested in understanding the effects of fiscal policy to read it.

One result I found interesting is the apparent temporary depressing effect of an anticipated tax cut, consistent with the predictions of a standard dynamic general equilibrium model...


Our results appear consistent with strong supply side eﬀects of tax changes. The strong decline in investment and the drop in hours worked in response to a pre-announced tax cut is consistent with the idea that future lower taxes motivate ﬁrms to delay purchases of capital goods and gives rise to intertemporal substitution of labor supply. Indeed, Mertens and Ravn (2011) show that a DSGE model can account quite precisely for the dynamics of output, investment, and hours worked that follow after unanticipated and anticipated changes in taxes...

The boom associated with an announced tax cut seems to begin only when the actual cut is implemented. Together, these two pieces of evidence make for an interesting interpretation of what caused (or at least contributed to) the early 1980s recession.


Anticipated tax liability changes were particularly relevant impulses to the business cycle during the early 1980’s recession, the expansion that followed thereafter, and during the early 2000’s.

Particularly interesting is the 1980’s episode where we ﬁnd that ERTA (Economic Recovery Tax Act) 1981 and the Social Security Amendments of 1977 together had a large impact on the U.S. economy. The Social Security Amendments of 1977 (signed by Carter in December 1977) included a 0.56 percent tax increase implemented in 1981. This tax liability change had an expansionary eﬀect on the economy prior to its implementation but provided a negative stimulus once implemented in 1981.

ERTA 1981, signed by Reagan in August 1981, was associated with major tax cuts implemented gradually from 1982 to 1984. These anticipated tax cuts had a negative impact on the U.S. economy from late 1981 up till the end of 1983, the same time as the negative eﬀects of the Social Security Amendments of 1977 were setting in. When the Reagan tax cuts were eventually implemented through 1982 to 1984, it provided a major stimulus to the economy during the mid 1980’s. Together, these anticipated tax cuts therefore stimulated the economy prior to 1981, gave rise to a contractionary eﬀects from 1981 to late 1983, and helped the economy recover thereafter.

Of course, these tax shocks are not estimated to be the whole story. Evidently, they account for around 20-25 percent of the in-sample variance of (detrended) output which, as the authors point out, is an estimate that is at least as large as the contribution of other popular candidates for business cycle impulses. In short, something that should be taken seriously!

Posted by David Andolfatto at 11:24 PM