Is higher inflation really the answer?

A lot of people, including those who favor NGDP targeting, want the Fed to raise the rate of inflation; at least, temporarily. Three questions immediately come to mind: [1] What is the theoretical mechanism linking economic prosperity to the rate at which nominal prices rise; [2] Exactly how is the Fed, given the tools at its disposal, supposed to generate higher inflation under current economic circumstances; and [3] What is the evidence to support the belief that more inflation will reduce unemployment (or increase real GDP)?

There are so many different views out there that it's hard for me to keep track of them all. My last couple of posts dealt with the idea of a NGDP target, and it's close cousin, a price-level target. I'm no expert in the area, but if I understand the logic correctly, the idea is for the Fed to reverse what was a sharp and unanticipated decline in the price-level that occurred in late 2008. The presumption is that because debt is denominated in nominal terms, an unexpected permanent decline in the price-level path increase the real value of the stock of outstanding nominal debt. In turn, this imposes a real burden on all debtors, including households with mortgages and the government sector.

There seem to be two aspects to the "price level" surprise shock. First, there is a "fairness" issue. The shock evidently resulted in a redistribution of wealth from debtors to creditors, and it is only fair that this wealth transfer be reversed. (And since the Fed was the agency responsible for letting the price level drop, it should do the undoing -- even if the same might be accomplished by the fiscal authority). Second, there is an "efficiency" issue. Somehow, this wealth transfer has manifested itself as "deficient aggregate demand." I am not exactly sure how this last part works--maybe somebody can enlighten me (in a language that I can understand--a mathematical model!).

In any case, I am not entirely sure I can believe in the quantitative importance of this mechanism. The prescription presumes a sharp and persistent decline in the price-level path, something that I have trouble seeing in the data. In particular, the follow diagram plots the (log) PCE price-level for the U.S. since 1990; the red line is a (log) linear trend. According this data, we are essentially back on the original price-level path (I think the same roughly holds true when the price-level is measured by the CPI or the GDP deflator). 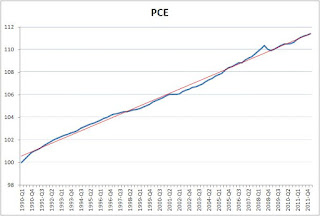 Of course, the "wealth channel" I described above is not the only way in which higher inflation might stimulate economic activity. Here is Paul Krugman for example: Krugman: Fed Should Tolerate More Inflation to Reduce Unemployment.

"The main thing the Fed can do is promise that they will be very slow to step on the brakes, that as the economy recovers that they will let inflation rise, not to high levels, but to 3 or 4 percent from two percent," Krugman suggested. "That would move the markets quite a lot. It would lead people who are making plans to think that sitting on cash is not a good idea.

I have no doubt that people would think that sitting on cash is not a good idea. The question is: how would people seek to transform their cash holdings? Krugman seems to think that people will want to go out and spend the cash on goods and services. But what if they instead decide to buy gold or Caribbean real estate? There is also the possibility that nominal rates might rise (perhaps not one for one) with higher expected inflation via a Fisher effect, leaving the real return on "safe haven" assets relatively unchanged. Who really knows what might happen?

At the same time, one has to ask how the move to a higher rate of inflation might affect different members of society. Those on fixed nominal incomes are likely to suffer; at least, in the short run (or however long it takes to index those incomes to the higher inflation rate). What about those who have no bank accounts--those people who rely on cash transactions--the poorest segment of the population? This could, in principle, be rectified by cash disbursements to those deemed to be in need, but...well, good luck with that.

And, in any case, just how is the Fed supposed to engineer this smooth ride up from 2% to 4% inflation? Jim Hamilton has a nice post today explaining why it might not be as easy as people generally think it might be; see here: Should the Fed Do More?

I haven't even touched on my third question here, the one dealing with the inflation-unemployment relationship (for long-run evidence, see the data in here). So many questions, so little time...
Posted by David Andolfatto at 3:37 PM