Does the Fed have a symmetric inflation target? 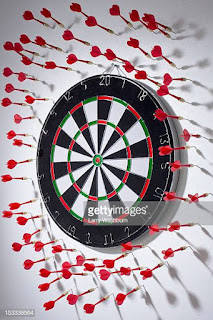 It's well-known that the Fed has been undershooting its inflation 2% target every year since 2012 (ironically, the year it formally adopted a 2% inflation target). This has led some to speculate whether 2% is being viewed more as a ceiling, rather than a target, as it is with the ECB. The Fed, however, continues to insist that not only is 2% a target, it is a symmetric target.  But what does this mean, exactly? And how can we judge whether the Fed has a symmetric inflation target or not?

These questions came to me while listening to Jay Powell's recent press conference following the FOMC's decision to follow through with a widely anticipated rate hike. At the 16:15 mark, reporter Binyamin Appelbaum (NY Times) asked Powell the following question:

Here is how Powell responded:

While this answer sounded reasonable on some level, it did not satisfy the very next inquisitor, Jeanna Smialek (Bloomberg):


JS: Just following up on Binya's question...I guess if you haven't achieved 2% and you don't see an overshoot -- which would sort of be implied by a symmetrical target -- what's the point of raising rates at all?

Powell replied to this by making reference to the strength of the economy -- growth well above trend, unemployment falling, inflation moving up to 2%, and a positive forecast. In this context, the rate hike seemed appropriate. Again, a sensible sounding answer -- but did it answer the question actually posed?

As I reflected on this exchange, I felt something amiss. And then it occurred to me that people might be mixing up the notion of a symmetric inflation target with a price-level target.

This would have been a fine answer to Jeanna's question, but isn't it inconsistent with the earlier reply to Binyamin? In that response, Powell left us with the impression that the FOMC has failed to achieve its symmetric inflation goal -- that success along this dimension would consist of actually observing inflation vary symmetrically around 2%. I'm not sure this is entirely correct.

As I said above, the success of an inflation targeting regime should be measured by how well inflation expectations are anchored around target. By this measure, the FOMC has managed, in my mind, a reasonable level of success (2015-16 looks weak). The following diagram plots the PCE inflation rate (blue) against expected inflation (TIPS breakevens) five years (red) and ten years (green) out.

In my view, the fact that realized inflation has persistently remained below target does not necessarily imply the absence of a symmetric inflation target. Let's take a look at the FOMC's official view on the matter, originally made public on January 24, 2012 in its Statement of Longer-Run Goals and Monetary Policy Strategy. Let me quote the relevant passage and highlight the key phrases:


The Committee reaffirms its judgment that inflation at the rate of 2 percent, as measured by the annual change in the price index for personal consumption expenditures, is most consistent over the longer run with the Federal Reserve’s statutory mandate. The Committee would be concerned if inflation were running persistently above or below this objective. Communicating this symmetric inflation goal clearly to the public helps keep longer-term inflation expectations firmly anchored, thereby fostering price stability...

It seems clear enough that the real goal here is to keep longer-term inflation expectations anchored at 2%.  The idea is that if inflation expectations are anchored in this manner, then the actual inflation rate today shouldn't matter that much for longer-term plans (like investment decisions). If inflation turns out to be low, you should be expecting it to rise. If it turns out to be high, you should be expecting it to fall. Nowhere does the statement suggest we should be expecting under or over shooting -- a characteristic we would associate with a price-level target. As for the phenomenon of persistent under or over shoots, the statement makes clear that the Committee would be equally (symmetrically) concerned in either case.

If one accepts my definition of symmetric inflation target then, unfortunately, we do not yet have enough data to judge whether the Fed's inflation target is symmetric. The policy was only formally implemented in 2012. Since then we've only observed a persistent undershoot and the conditions leading to these persistent downward surprises. Would the FOMC be equally tolerant of letting inflation surprise to the upside for several years should economic conditions warrant? It seems that we'll have to wait and see.