John Cochrane has another fun and provocative post making his pitch for equity-financed banking. He makes a lot of great points. But I'm still left feeling a little uneasy. In particular, I wonder whether some of his sweeping claims have any firm theoretical backing. It could be I just haven't thought hard enough or long enough about it. In any case, in the spirit of promoting discussion, let me describe some of the things that bother me.

Actually, before I start, I should preface my concerns with a couple of observations. Policies directed toward stabilizing the banking sector target both the asset and liability side of bank balance sheets. The "narrow banking" proposal of 100% reserves, for example, is a policy designed to make bank assets safe. The "100% equity-financed banking" proposal on the other hand is a policy designed to render bank liabilities safe (run-proof). According to Cochrane, "...bank assets aren’t risky! A diversified, mostly marketable portfolio of loans and mortgage backed securities is far safer than the profit stream of any company." The problem evidently lies on the liability side. Moreover, the issue here is not simply one of ascertaining whether banks are "over-levered" (I'm willing to agree that they probably are). The issue is whether debt (fixed-value promises), especially demandable debt, has a role to play in the business of banking at all.

The main question I have is: where's the theory? In the benchmark neoclassical model, some version of the Modigliani-Miller theorem typically holds. The theorem states that under a very specific set of assumptions, the liability structure of a firm does not matter. We know that these assumptions (e.g., symmetric information) do not literally hold in reality. When information is asymmetric, debt can be superior way to fund assets relative to equity (see here and here, for example). Demandable debt may have socially desirable properties when liquidity demands are private information; see here. In a world where exchange media (including collateral assets) are valued, it could matter very much how the "pizza" is sliced into tranches designed to serve special uses.

What explains the widespread use of the debt contract and the prevalence of fractional reserve banking? The explanation is unlikely (in my view) to be "government distortions" or "greedy bankers." It seems to me that asymmetric information in financial markets is a pertinent real-world friction. Could it be that debt represents a sort of "second-best" solution to the problem of efficient (low-cost) financing in a world of asymmetric information? Might the same not be true of demandable debt? Implicitly, Cochrane must be thinking that these benefits are quantitatively small. Maybe so, but senior liability tranches do seem rather highly valued in the market place, especially as exchange media. Private monetary instruments have always been in the form of debt, not equity. Why has this been the case?

Cochrane begins his post with the statement "My premise is that, at its core, our financial crisis was a systemic run. The mechanism is familiar from Diamond and Dybvig."  The Diamond and Dybvig (1983) model can indeed be interpreted as a theory of bank sector fragility. But we should keep in mind it's also a theory that explains the benefits of an illiquid bank sector (a point stressed by Wallace, 1996). Moreover, it's also a theory that explains the desirability of demandable debt. We want demandable liabilities (according to this theory) because, well, imagine going to an ATM wanting to withdraw cash and then having the blasted thing make you fill out an insurance claim attempting to verify whether you do indeed have a pressing need for liquidity. (In fact, banks were known to do this during the banking panics of the 20th century.)

Now, I suspect that Cochrane may reply that while demandable debt in its traditional form once had a useful role to play, markets and communication technologies are now developed to the point that renders the demand deposit liability superfluous. Call me a hopeful skeptic. Cochrane claims that "unlevered bank equity would have 1/10 less the volatility it has today, so we're talking about 2% volatility on an annual basis." I'm not sure where he gets these numbers, though I do agree with him qualitatively. (On the other hand, how do we know that banks will not hold riskier assets if they are equity financed?) 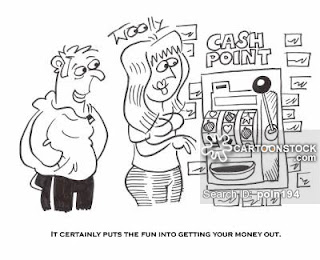 In any case, just how much volatility is "too much" for depositors wanting transactions balances with a steady value to ensure that payment obligations can be met in all circumstances on a timely basis? Evidently, depositors value the fact that they can redeem their bank money at par for cash quite a bit. What Cochrane advocates is the replacement our present ATMs with one-armed bandits spitting out random returns whenever we want to redeem our bank equity shares for cash. That sounds like a lot of fun, but it may not be very practical. Perhaps the volatility of these returns will not be so great (how do we know?). Maybe we'll be able to withdraw only 98 cents on the dollar more often than not "by chance" (as the Gorton-Pennacchi insiders skim us outsiders while claiming "bad equity returns" as the culprit. Again, how do we know?)

I want to be clear here. I am not suggesting that Cochrane's proposals are a bad idea when all considerations are factored in. I'm just questioning whether it's the open-and-shut case he makes it out to be. If it is such a great idea, I wonder why banks have not offered the product on their own? (I am sure there is no shortage of explanations here, but still, it's worth having them spelled out.)

There is one final thing I want to touch on before I sign off here. The main reason Cochrane preferes equity over debt is because equity is evidently "run-proof." I don't know, he may have his own special definition of "run." There are macroeconomic models of multiple equilibria (see Roger Farmer) where shareholders might be compelled to "run" on equity, driving its price lower, leading to all sorts of negative pecuniary externalities and self-fulfilling crises. Getting rid of debt will not necessarily get rid of financial crises.

Of course, getting rid of debt will get rid of bankruptcy. But I am sometimes led to question whether bankruptcy is quantitatively relevant for causing or exacerbating recessions. As Cochrane points out:


Our crisis and recession were not the result of specific business operations failing. Failure is failure to pay creditors, not a black hole where there once was a business. Operations keep going in bankruptcy. The ATMs did not go dark.

Absolutely. I can recall several times when an airline went bankrupt with no noticeable side-effects (passengers were treated terribly, but that was normal even outside of bankruptcy). Bruce Smith (2002) reports evidence suggesting that bank panics are not always associated with output losses. If so, then what's the big deal? As Cochrane explains, when equity takes a plunge, we all pull out our hair, but the firm is under no obligation to do anything on our behalf. But with debt--demandable debt in particular--we can demand--demand--our money back. And the firm has to ... has to what? I'm not really sure. The firm can just continue to operate as usual and restructure its debt, no? After all, bankruptcy is just a rearrangement of claims against a firm's assets (well, I suppose in some cases senior management gets the ax, but not always). In the old days, banks were permitted to temporarily suspend withdrawals without legal repercussion. As well, bank clearinghouses might issue currency substitutes in lieu of specie, etc.

These considerations lead me to wonder whether interventions on the asset side of bank balance sheets might not be a better way to promote a run-free banking system. Alternatively, as Cochrane suggests, we might consider opening up the central bank's balance sheet to the public. As I've mentioned before, the U.S. treasury does permit the public to hold online UST accounts at www.treasurydirect.gov. While the system is not set up for making payments, there is no reason why, in principle, it could not be. I'm not suggesting this as a panacea, of course. But I think the idea, or some variant of it, deserves serious consideration.

Posted by David Andolfatto at 9:28 PM