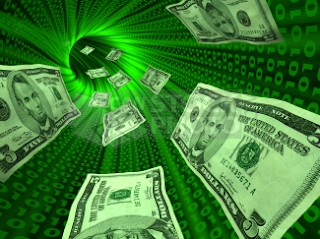 Economic exchange depends critically on secure and trustworthy payment systems. Because payment systems are fundamentally about recording and communicating information, it should come as no surprise that payment systems have evolved in tandem with advancements in electronic data storage and communications. One exciting development of late is Bitcoin--an algorithmic-based, communally-operated money and payment system. I thought I'd take some time to gather my thoughts on Bitcoin and to ponder how central banks might respond to this innovation.

Bitcoin is open-source software designed to govern a money and payment system without the aid of conventional intermediaries like chartered and central banks. The role of chartered banks as payment processors is replaced by a communal consensus protocol (mining), where transaction histories are recorded on an open ledger (the blockchain). The role of a central bank is replaced by a "fixed" money supply rule (Note: nothing is truly "fixed" in Bitcoin since the community could, in principle, "vote" to change program parameters at subsequent dates. This is true, of course, for any system of governance.)

Bitcoin is about as close as we have come to digital cash. And because the bitcoin is in relatively fixed supply (or so we think), people sometimes refer to Bitcoin as managing a digital-gold system.

Let's think about cash for a minute.  Cash is a bearer instrument (ownership is equated with possession). Cash payments are made in a P2P manner, without the aid of an intermediary. When I buy my morning coffee, I debit my wallet of cash and the merchant credits her register by the same amount. There is a finality to the transaction (unless my coffee is cold and the merchant values my future business). To the extent that cash is difficult to counterfeit, it solves the double-spend problem. The use of a cash-based payment system is "permissionless" (no application process is needed to open a cash wallet, no personal information needs to be relinquished to open an account). Relatedly, cash is "censorship-resistant," meaning that you can basically spend it as you see fit. Finally, cash is distributed on an invisible ledger, permitting a degree of anonymity. Cash transactions need not leave a paper trail.

The digital money issued by banks is different from cash in several respects. One main difference is that transactions between any two traders must be intermediated by a bank. Transactors implicitly trust the bank to do the proper book-keeping and it is this trust that "solves" the double-spend problem for digital bank money. Bank money is not permissionless. One has to make an application for a bank account and, in the process, relinquish a great deal of personal information that one trusts the bank to keep secure. People who are unable to properly identity themselves are denied conventional banking services (up to 1/4 of American households are estimated to be unbanked or underbanked). Bank money is not censorship resistant--banks may not process certain types of payment requests on your behalf. Of course, bank money leaves a digital trail (albeit on a system of closed ledgers) with your identity clearly attached to a particular transaction history.

So what are the benefits of Bitcoin? The benefits are likely to vary from person to person, but in general, I'd say the following. First, it's monetary policy reduces the "hot potato" motive of economizing on money balances--that is, it offers the prospect of being a decent long-run store of value. Second, anyone with access to the internet can access an account (a public/private key pair) for free--like cash, no permission is needed. The public key is like an account number and the private key is like a password. Account balances remain secure as long as the private key remains secure. Third, like cash, no personal information is necessary to open an account, so no need to worry about securing private information. Fourth, like cash, bitcoin is censorship resistant--no one can prevent you from spending/receiving bitcoin from whomever you like. Fifth, bitcoin can offer a greater degree of anonymity than bank deposit money, but less so than cash (unlike cash, the blockchain ledger is visible and public). Sixth, the entire money supply (blockchain) lives on a replicated distributed ledger--it lives simultaneously everywhere--so that "sending money somewhere" means updating the ledger on all computers everywhere. There are no banks, there are no borders. Seventh, the user cost of transferring value is relatively low.

As I said, the extent to which consumers value these benefits likely depends on a host of factors. I see potentially large benefits to relatively poor individuals who have limited access to conventional banking services. It is estimated that up to one in four U.S. households are unbanked or underbanked--people who must rely on high-cost bill-pay, prepaid debit cards, check cashing services, and payday loans. The benefits are likely to be greater for poor individuals living in high inflation regimes that do not have access to interest-bearing (inflation protected) accounts.

What are the costs of Bitcoin? First, it is not a unit of account. Because of its monetary policy and its unstable demand, its value is quite volatile over short periods of time, making it inconvenient as a payment instrument (even if it is a good long-run store of value). Second, it has the same security properties as cash--losing or forgetting your private key is like losing your wallet. One could employ the services of a third-party in this regard, but if so, then why not just use a bank? Third, although the user cost of Bitcoin is presently low, the social cost (primarily in the form of electricity) is high relative to the cost of operating trusted ledgers. Fourth, because of its cash-like properties, bitcoin can also help facilitate illicit trade. (Of course, the same is true of cash.)

How might the advent of Bitcoin influence central bank thinking?

First, the threat of Bitcoin (and of currency substitutes in general) places constraints on monetary policy. In jurisdictions that finance large amounts government spending through the inflation tax, such a constraint may become binding.

Second, to the extent that bitcoin becomes a significant payment instrument (or even the unit of account), it might open the door to financial instability. Experience demonstrates the private sector's desire for maturity transformation or, more generally, the willingness to act on incentives that make funding illiquid assets with short-term debt a preferred balance sheet structure. The same incentives would presumably be in place in a Bitcoin economy. In principle, demand-like liabilities should trade at a risk premium. But in practice, they may not. Especially in times of economic complacency, they are likely to be viewed as close to perfect substitutes in terms of their money properties, just like bank money and cash today (and the way U.S. treasury debt and senior tranches of private-label MBS were viewed as close collateral substitutes in the repo market prior to 2008). The question is what happens if and when there is a "bank-run" or "roll-over crisis" on such a system? The situation is exacerbated if bitcoin is not the unit of account (think of European banks issuing loans denominated in USD). Since federal deposit insurance may not be available and since no LOLR can issue BTC, a classic bank panic is possible. Central banks and fiscal authorities would have to think about what, if anything, to do in such circumstances. One solution may be to impose narrow banking restrictions for banks (and other entities) engaged in bitcoin-denominated maturity transformation.

My own recommendation is for central banks to consider offering digital money services (possibly even a cryptocurrency) at the retail and wholesale level. There is no reason why, in principle, a central bank could not offer online accounts, the same way the U.S. Treasury presently does (www.treasurydirect.gov). These accounts would obviously not have to be insured. They would provide firms with a safe place to manage their cash without resorting to the banking or shadow banking sector. They would give monetary policy an additional instrument--the ability to pay interest on low-denomination money (possibly at a negative rate). To the extent paper money is displaced, there would be large cost savings as well.

It's hard (for me) to see what the downsides are in having a central bank supply digital money. Critics might argue that it leaves people exposed to potentially poor monetary policy. This may be true and, for these people, currency substitutes should be available (including Bitcoin). In terms of payments, critics might argue that central bank accounts will be permissioned accounts, requiring the release of personal information, application efforts, that KYC restrictions will apply (so not censorship resistant) and so on. To address these concerns, a central bank could go one step further and issue a cryptocurrency (Fedcoin) offered at a fixed exchange rate where payments are cleared using a Bitcoin-inspired anonymous communal consensus algorithm. I don't think we can expect anything like this in the near future, but it is technologically possible. Of course, people will complain that Fedcoin will inspire illicit trade, etc. But again, the same is true of regular central bank issued cash.

There is the question of how such an innovation might impact traditional banking models. I'll leave this question for another post.
Posted by David Andolfatto at 12:09 PM