The labor force participation rate (LPR) is defined as the share of the civilian noninstitutionalized that is employed (working) or unemployed (looking for work). In 1970, the U.S. LPR was about 60%. It rose steadily for 30 years, reaching peak of 67.1% in 2000. It has been declining since that time, dropping sharply in the recent recession, and currently sits at around 63%.
Question: How much of the recent decline in LPR is due to a bad economy (cyclical factors)? And how much of it might be due to long-term trends associated with changing demographics (structural factors)?

Christopher Erceg and Andrew Levin have a new paper out which suggests that cyclical factors are responsible (Labor Force Participation and Monetary Policy in the Wake of the Great Recession). Much of their estimate of LPR trend, however, seems to be based on a particular BLS projection. On pages 9-10, they state:


In our view, the labor force projections published by the BLS in November 2007 serve as an invaluable resource in assessing the influence of demographic factors on the subsequent decline in the LFPR. In making such projections, BLS sta¤ consider detailed demographic groups using state-of-the-art statistical procedures in conjunction with micro data from the Current Population Survey (CPS) and various other sources, including interim updates from the U.S. Census Bureau.

But as the following figure demonstrates, BLS projections of trend LPR seem to vary quite a bit over time:

The figure above is drawn from A Closer Look at the Decline in the Labor Force Participation Rate (Maria Canon, Peter Debbaut, and Marianna Kudlyak). The authors state:


It is tempting to interpret the prerecession projections as reflecting the long-term trend in the LFP rate. However, we observed that the BLS's projections did not necessarily capture the long-term trend; rather, to a substantial degree, they were influenced by the most recent data points. Consequently, this cautions against treating the difference between the actual LFP in 2012 and its BLS projection released in 2007 as entirely due to cyclical factors.

[Note: Erceg and Levin do not rely solely on BLS measures of trend LPR. Much of their empirical work is based on state-level differences in labor market variables.]

It is of some interest to note that this is not the first time policymakers have been interested in the cyclical vs. structural decomposition of LPR. The same questions were being asked nearly a decade ago following a much milder recession (and jobless recovery).

The authors use a cohort-based model to estimate LPR trend. They state their conclusions as follows: 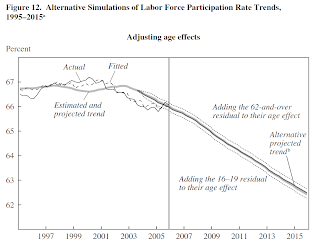