Flatlining in the UK

How bad is the UK recovery dynamic?

Bottomed out -- let's hope so! Can things get any worse? 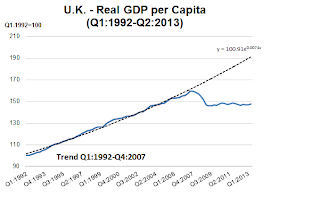 Because the real GDP is flat, any rise in the nominal GDP is attributable entirely to inflation (increases in the general level of prices). From 1992-1997, the BoE targeted the RPIX inflation rate at 2% per annum. In 1997, the target was raised to 2.5%. 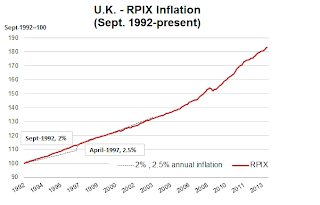 In 2003, the UK switched to targeting CPI inflation at 2% per annum. 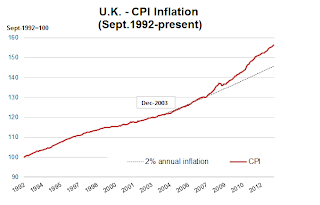 So unlike in many other countries, inflation appears to be running at a robust rate. Is this helping, hurting, or innocuous as far as determining real economic activity? (Would like the NGDP targeters to weigh in on this question.)

The following diagram decomposes real GDP (total, not per capita) into consumption (private and public), investment (public and private) and net exports. 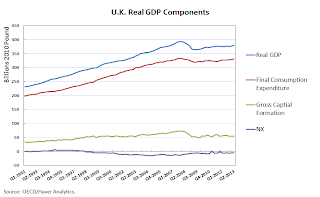 So both domestic (real) expenditure components, consumption and investment, took a big hit in the recession. If we take the same data and normalize each series to 100 in 1992, we see that investment grew relatively faster during the boom, and took the bigger hit in the bust. 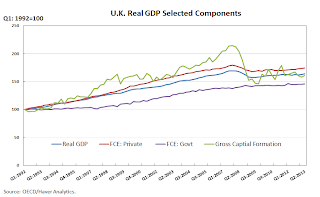 Now let's break down the (real) expenditure components between the private and public sectors. Again, normalize the levels to 100 in 1992. Here is what consumption looks like: 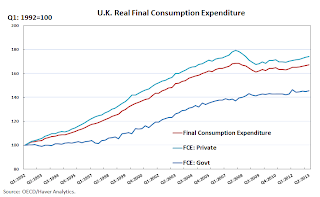 The big drop seems to be in private consumer spending. Government purchases of consumption goods appears to have held pretty steady through the downturn. What about capital spending? Here, we can only get a breakdown between private and public investment going back to 1997. Government investment is small relative to total investment, but has nevertheless remained elevated relative to private capital spending through most of the sample period: 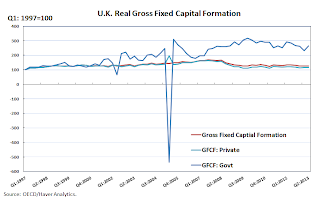 Note: In April 2005 British Nuclear Fuels plc (BNFL) transferred to the Nuclear Decommissioning Authority (NDA) nuclear reactors that were reaching the ends of their productive lives. BNFL is classified as a public corporation in the National Accounts and the NDA as central government.

In terms of the UK's much publicized austerity measures, the data here suggest that most of any cuts in government spending must have been in the form of reduced transfer payments. Government spending on goods and services seems to have held up relatively well throughout the contraction in economic activity.
Posted by David Andolfatto at 10:59 AM