As almost everyone knows, inflation appears to be ticking upward. PCE inflation has recently approached an annual rate of around 5%. However, core inflation--the inflation rate that strips out the food and energy components of the consumption basket--remains relatively subdued (almost 2%, though it too has been rising as of late).

The Fed is widely understood to have an implicit inflation target of 2%. And the Fed has been known in the past for preferring the core PCE inflation measure over actual (headline) inflation numbers. With food and energy prices rising rapidly as of late, the reference to core inflation makes the Fed look out of touch with the prices consumers actually pay for their daily basket (food and energy make up about 25% of the average consumption basket).

What, if anything, justifies looking at price indices that strip out components of the index? A cynical view is that the Fed may prefer core to headline because it evidently makes the Fed's performance look better (in terms of keeping inflation low). This cynical view conveniently ignores the fact that headline inflation is frequently below core.

If you want to educate yourself about the issues surrounding the use of core, I recommend that you read this piece by Jim Bullard: Headline vs. Core Inflation: A Look at Some Issues. He starts as follows...


Monetary policymakers are responsible for maintaining overall price stability, which is usually interpreted as low and stable inflation. In order to decide on appropriate policy actions given their objective, policymakers need to know the current rate of inflation and where it is headed. What makes for a reliable predictor of future inflation has been debated throughout the years and continues to be the subject of economic analyses today.


In the end, the policymakers' goal is to use the inflation measure that helps them achieve low and stable headline inflation in the long run.

In short, the Fed is not wedded to any particular policy-relevant measure of inflation. Many different measures should likely be used as input into any policy decisions.

In terms of the use of core inflation, my own personal view leans toward dispensing with any inflation measure that strips out components of the consumption basket. If the main object of doing so is to get at some measure of "trend" inflation, then why not just compute a trend directly? For example, here is what one would get by using a simple exponential trend: 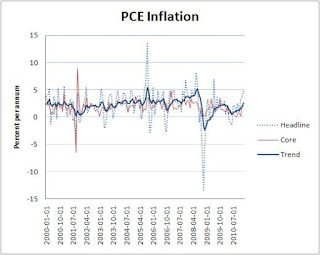 My crude measure of trend is not that much different from core. I doubt that there would have been any substantive difference in the way policy was actually conducted if reference had been made to this (or some other) measure of trend over the core measure. And an explicit reference to trend rather than core may have deflected the silly charge made by some that the Fed does not care about food and energy prices.
Posted by David Andolfatto at 7:54 AM