Here are a couple of slides, courtesy of my colleague Kevin Kleisen. The first depicts recent U.S. inflation, both core and headline. 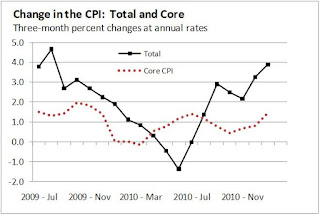 So, following a rather sharp decline in the headline CPI rate, we see an even sharper increase more recently. The core measure, however, remains relatively low and stable.

This next graph depicts a variety of market-based measures of inflation expectations. You may recall that the Fed was recently concerned that inflation expectations were drifting too low (relative to the implicitly desired target or around 2%). Inflation expectations now appear to have converged to pre-crisis levels. One could make a legitimate case that to the extent this was a part of the goal for QE2, the policy was a success. 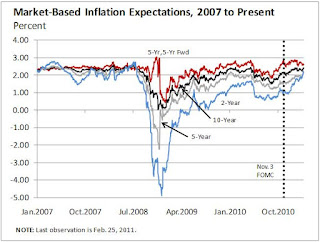 Of course, the fear that many people have is that inflation may somehow get out of control. It is a legitimate concern and one that ranks high on the list of FOMC members.

And then there are a host of other concerns, like the ones outlined here by Pimco Managing Director Bill Gross: Economy May Reverse Course When Fed Buying Ends. I especially like this quote:


"Who will buy Treasuries when the Fed doesn't?" he asked. "I don't know."

I'm sure Mr. Gross is a smart guy. But statements like that just make him sound a tad foolish.

Think about it. A USD is the equivalent of a zero-interest-bearing small denomination Treasury bill. So when the Fed is purchasing longer dated Treasuries, what is it doing? It is selling zero-interest bills for (slightly) positive-interest bills. Would a deceleration in this asset-swap activity really have the dramatic effect Gross suggests? (He is suggesting a sharp spike in Treasury yields). I doubt it. In fact, the implied tightening is likely to keep a lid on inflation expectations and hence keep nominal interest rates low (via the Fisher effect).

But we shall see...
Posted by David Andolfatto at 8:32 AM

Email ThisBlogThis!Share to TwitterShare to FacebookShare to Pinterest
Labels: Inflation